You are in : Home » Company » Once Upon a Time » The fabulous Sixties

Published in Once Upon a Time

Advanced solutions, safety and high quality: the Peg Perego Sixties are when Giuseppe’s ‘ideas’ – born from practical experience and the attention paid to the needs of children and their mothers – take shape and are transformed into products that mark the history of Italian families.

The Sixties were the years of the economic boom, of faith in (and enthusiasm for) the modern technology that brought items such as televisions and fridges into every house. So just try to imagine how much the products launched by Peg Perego at the time must have meant to mothers.

Think about what a great innovation Autositz must have been – a stroller that served two purposes, walks and going in the car. Such safety and ease of use would have been unthinkable only a few years earlier. The same applies to the new levels of comfort provided by strollers such as Brigitte, Carole, Iris, Victory… They were designed for increasingly active mothers and especially for their children, with the aim of ensuring high levels of safety from birth. The innovative, ergonomic design of Infanseat, the world’s safest baby seat with an innovative, ergonomic design, is part of this trend. With the America and Atlantico chassis (which could be folded and carried in cars), it was the feather in Peg Perego’s hat. “Foldable”: just think of what this means, really. Never before had mothers had such a practical item that allowed so much. We modern mothers take foldable strollers for granted, but we owe their existence to the research and innovation introduced by companies such as Peg Perego. 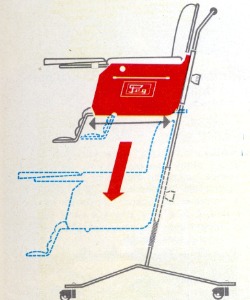 At the end of the Sixties Baby-Boy, the first transformable super high chair, appeared on the market. ‘Multifunctional’ is another key element that, as well as making things easier, meant efficiently using space and resources, which were already beginning to shrink in the average Italian home. The height of Baby-boy could be adjusted and its removable seat used as a car seat. There is a big difference between what was considered ‘safe’ in the 1960s and what is described as ‘safe’ now, but Baby Boy still is, to date, the product for children that received the highest number of awards in the world. It speaks volumes about the ‘daily’ innovation Peg Perego focused on.

The same innovation is available today in Tatamia, the first bouncer and rocking chair that can be turned into a highchair for the baby’s first meals. This wholly Made in Italy product can offer mothers a mixture of advanced technologies, just as a nanny (‘tata’ in Italian) used to do in the past. It is a perfect example of Peg Perego’s undiminished ability to combine shape and function, of the experience gained during years of taking care of mothers and our children.

The great changes of the Seventies ‹ The Blog of Peg Perego

[...] the great success of Infanseat, many other historical Peg Perego products were launched in this decade. They were specifically [...]