You are in : Home » Company » Once Upon a Time » The great changes of the Seventies

The great changes of the Seventies

Writteb by Administrator
25 October 2012
No Comments

If it wasn’t practical and versatile, we didn’t want it…

Published in Once Upon a Time

Switching to industrial production with increasingly higher levels of automatic assembly was a crucial event, even for Peg Perego that played a major part in this decade of innovation. More advanced technology improved Peg Perego products even more, making them stronger, safer and more practical.

In the 1970s a new ‘family concept’ was born and spread, in which mothers work and fathers are expected to help with household duties. It was not by chance that these products, designed to help mothers and fathers, were launched in this period.

After the great success of Infanseat, many other historical Peg Perego products were launched in this decade. They were specifically designed to help increasingly active families and mothers, who were no less concerned about the happiness and safety of their children than before. The BimboPeg bed, the Superbox, the baby carrier baskets are all part of this long-sighted vision. 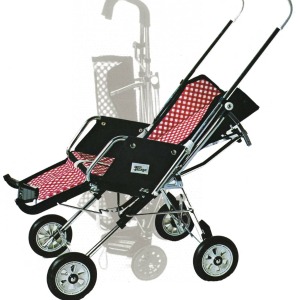 One of the most emblematic innovative ideas, which truly represents the spirit of the times and Peg Perego’s commitment to creating a ‘mother-friendly’ technology, is the umbrella fold. The first collapsible stroller was Go-Go (top photograph), followed by Bye Bye, Peg Perego’s leading product from 1975.

Today we take folding strollers for granted but just think about what a revolutionary product it must have been in the mid 1970s – a foldable stroller that was small enough to fit into a car boot! Such items can make a big difference to mothers and change family lifestyles considerably, but the underlying philosophy – Peg Perego’s attention the needs of mothers and the welfare of children – never changes.