Writteb by Administrator
16 September 2013
No Comments

Face to face with Mauro Albertini, the manager of the Business Unit Giocattolo.

As  we told you earlier in the year, we are very proud of our new Fiat500, a real little made in Italy gem that adults and children will fall in love with. To learn more about it, we spoke to Mauro Albertini, the manager of the Toys unit, where ideas are born, turned into items and finally sent to the production line.

Where did the idea of this car come from?

As I am sure you know, a few years ago we successfully made a toy ride-on replica of the VespaGT scooter. The Fiat team was so impressed by the accuracy and precision of the toy model that they asked us if we were interested in making a replica of the FIAT500 with the same level of accuracy in the details. Obviously Peg Perego was enthusiastic and the project started. 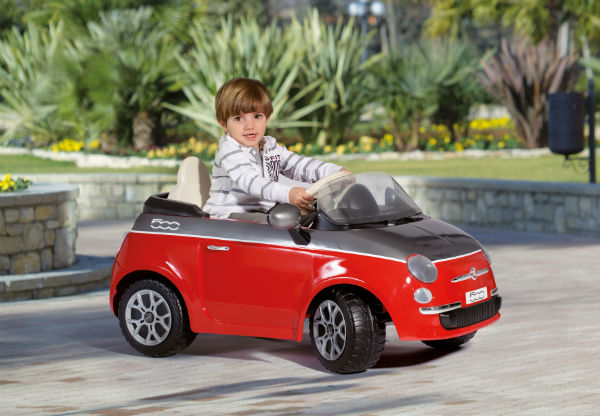 What are the differences with the other models currently on the market?

There is now doubt that our FIAT500 is the best expression of experience, quality and reliability. Naturally, important aspects are the size of the vehicle and how comfortable it is, but the wealth of details is also greatly appreciated. There is a fake motor under the hood, which is made of three removable pieces that can be assembled together – a toy in a toy. That space can also be used by the ‘drivers’ to store their favorite toys. 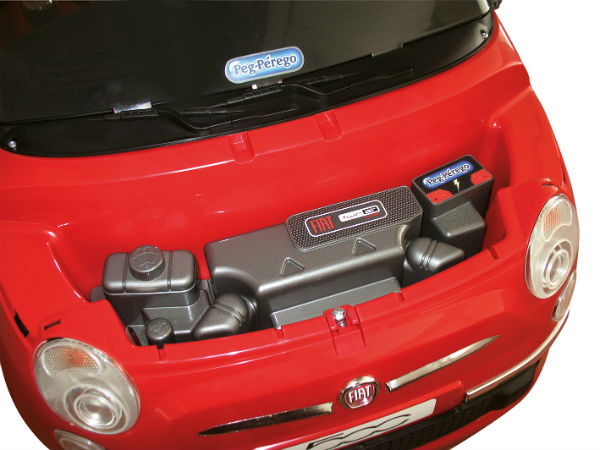 Who is the car for?

Our FIAT500 is available in different models, each designed to suit the needs of different ages and stages of growth. It is suitable for children from 12 months to 6 years. There are three versions:

- a 6V version, with forward and reverse gears and a remote control for parents (suitable for children from 12 months).

- a 6V version, with forward and reverse gears and no remote control (for children aged 2 and older).

- 12V version, with 2 speeds and reverse gear, suitable for children over the age of 3 (because of the speeds it reaches).

What else is worthy of mention here?

Other than the hood with a fake modular motor that can be fitted in (which children love!) the horn is great fun because it makes exactly the same sound as the horn in the real car. 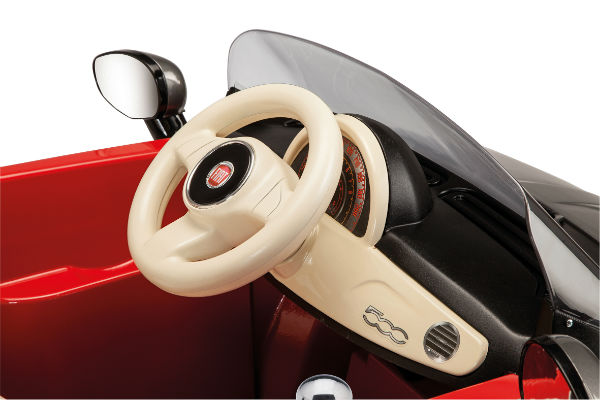 On the radio-controlled 6V version we have a drive-by-wire turning system, which means there is no steering column because, thanks to an electric servo control, the wheels rotate proportionally with the rotation of the steering wheel or of the remote control.  This makes the car much, much easier to drive because the servo control acts like power steering in a real car. This is very useful for young children whose coordination in the car is limited and it makes turning effort-free. It is just as useful for parents because the software of the car’s control board coordinates the movement of the wheels according to the commands received via radio. There is none of the ‘confusion’ typically associated with remote controls and the car’s movements are fluid and continuous, making the vehicle easier to drive and control.

When the child has enough coordination to drive the car independently, the remote control can be excluded by acting on the control key near the gear lever.

The 6V basic version, designed for children aged 2 or more who are able to drive the car independently, has a forward-reverse command, which allows drivers to maneuver the car just as if it were a real one.

The 12V version is a 2-wheel drive that can easily drive over obstacles, grass and uneven terrain. The car’s top speed is 6.3 Km/h, it has 2 forwards speeds and a reverse gear, which makes this very dynamic toy even more amusing to play with.

And if you are true fans of the great Fiat 500, don’t forget our dedicated Book Plus Modular!